The Saratoga Greenbelt Trail (SGT) is a planned 24-mile shared use path that will form a continuous loop providing non-motorized connections across the city of Saratoga Springs, NY. This trail will serve as the foundation for the City’s active mobility system, with complete streets improvements forming radial spokes into the center of the city and the Saratoga County Trails network, providing connections across the county.

In 2014, the City Council unanimously approved the Saratoga Springs Greenbelt Trail Feasibility Study. This well-conceived plan documents the vision and the proposed, in-progress, and existing route through the City, the Town of Wilton, and the Town of Greenfield.  On June 17th of 2020, City Council adopted an updated map to reflect additions to the trail system as well as realignments of its path.

Complete. The City will be upgrading the sidewalk over the bridge in 2022.

The City of Saratoga Springs is in the final planning stages to construct a 1.66 mile urban section of the Saratoga Greenbelt Trail. The new multi-use trail will start at the corner of Lake Avenue and High Rock Avenue extending up High Rock Avenue to Excelsior Avenue and terminating at the Route 50 bridge over I-87 at exit 15. The project will include a multi-use trail on one side of High Rock Avenue and Excelsior Avenue. The trail will replace the existing sidewalk with a 10 foot multi-use trail. On the opposite side of the street, the project will complete missing sidewalk segments to create a continuous pedestrian path. The Saratoga Greenbelt Downtown Connector Trail project’s preliminary design has been approved by the NYS Department of Transportation and is currently in the right-of way acquisition phase.

The City of Saratoga Springs is pleased to announce it has received approximately $2.67 million from the Department of Environmental Conservation (DEC Climate Protection Implementation Projects – Category 1 Clean Transportation ($1,134,333) and Department of Transportation (DOT) Transportation Alternatives Program (TAP) -’" Congestion Mitigation and Air Quality Improvement Program to complete the Saratoga Greenbelt Downtown Connector ($1,531,626). Other funding is provided through the 2017 Capital Budget, the Reserve Fund for the Purchase of Parkland and/or for Capital Improvements to Existing Parkland, Expenditure of the Subdivision Regulations and as part of its Zoning Ordinance (Section 7.2.18), as well as private development improvements. 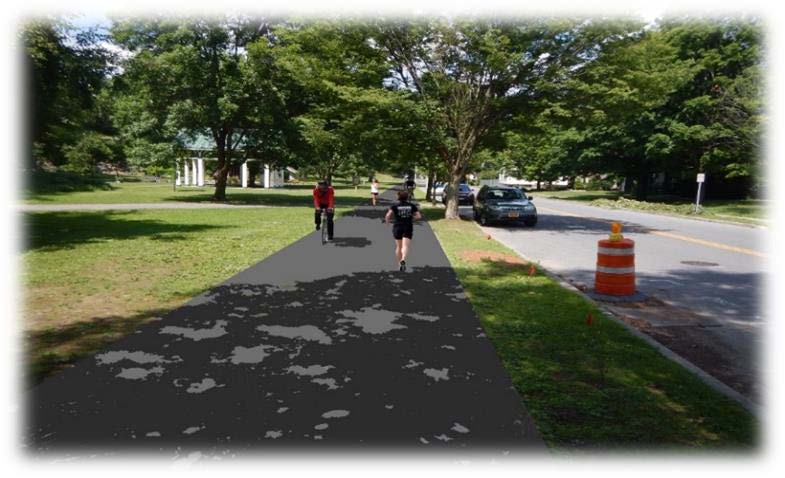 Written comments can be submitted via email to: Christina.Carton@Saratoga-Springs.org