Settling of Saratoga Springs
The official seal adopted by the City of Saratoga Springs, depicts a Mohawk family at High Rock Spring, and is based on an illustration by John Ehninger (1827-1889). The image pays homage to High Rock, and the Native Americans who, in 1771, brought Sir William Johnson to the “great medicine spring.”

In the 1770’s, several pioneers attempted settlement in the High Rock Area including Dirck Schouten, John Arnold, Samuel Norton, a son of Samuel Norton, and Gilbert Morgan. In 1783, General Philip Schuyler cut a path through the wilderness, from his home in Old Saratoga, by the Hudson River near Fish Creek, to the High Rock Spring, and built a cabin.

Permanent Residents
While on a northern tour in 1783, General George Washington traveled to the High Rock Spring with his party, and drank the waters before continuing their journey southward. Alexander Bryan is considered the first permanent resident at the springs in 1787. Bryan built a blacksmith shop and an additional log building where he opened a tavern. The area around High Rock continued to develop as the Blakeslys, Risleys and Taylors settled and started businesses in what would become known as the “Upper Village.”

About a mile south from High Rock Spring, in the area of present day Congress Spring and Congress Park, the Lower Village was being carved out of the forest. Gideon and Doanda Putnam had arrived in 1789 and farmed and lumbered a plot of land on Prospect Hill, near where Saratoga Hospital is today. Putnams acquired capital by making staves and shingles and carting them by horse and wagon to the Hudson River, where the materials were shipped to towns and cities south of this area.

Congress Spring
The Congress Spring had been discovered in 1792 and was attracting ever-increasing numbers of visitors. Gideon Putnam tubed the Congress Spring and built his Tavern and Boarding House in 1802. Gideon Putnam had the vision to see the possibilities at the springs at Saratoga. Gideon Putnam built Broadstreet, today's Broadway, to be more than 100 feet wide. He expanded his boarding house to become The Union, which later in the 1800's became the Grand Union. Putnam also built the Congress Hall, on land where our Arts Council is today. It was while building Congress Hall that he fell from scaffolding in 1811, and died a year later as a result of that fall. The land along Broadstreet continued to be developed, thrive and prosper, as the Upper and Lower Villages, became one.

Modern Government
The City of Saratoga Springs’ has a commission form of government, also called the ‘Galveston Plan. This form was created in Galveston, Texas in 1901, as a result of a devastating hurricane in 1900. There are 5 at-large City Council members, all responsible for taxation, appropriations, ordinances, and other general functions. However, each Commissioner also has individual functions as the head of and specific to their respective departments. The 5 departments are Mayor, Finance, Accounts, Public Works and Public Safety. More information about each can be found by clicking on the ‘Local Government’ tab. 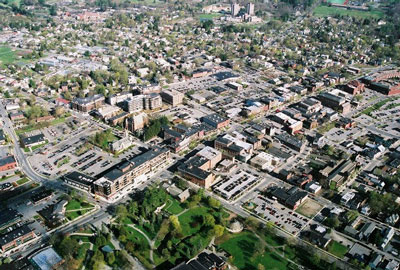