The Saratoga Springs mounted patrol is under the command of Captain Michael Chowske, and is utilized by both the Traffic and Patrol Division. The mounted patrol is primarily assigned to patrol the streets in and around the Saratoga Race Track. Other duties include working at special events, parades, entertainment events, public celebrations and downtown patrol.

Assignment to the mounted patrol is voluntary and there is currently a list of applicants waiting to be trained. Applicants are expected to have at least 3 years of exceptional service and must successfully complete a 7-week training course. The mounted patrol mission is traffic control, crowd control, community relations and prevention of street crimes.

Public relations is a major part of the mounted officers job. People are magnetically drawn to the officer on horseback. Whether people are just asking questions, looking for directions or need to report a crime, the mounted officer is highly visible and easy to find.

Horses
The horses of the mounted patrol must be geldings at least 16 hands tall and at least 3 years old. Vices such as biting, kicking or cribbing would disqualify the horse. 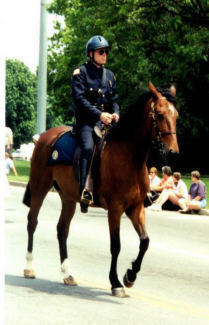 The horse must be sound of wind and limb, that is, they can’t have any injuries or conditions that would preclude it from performing its job. Once a horse is accepted it goes through training to teach it all the cues the mounted officer uses and exposes it to things it may encounter on the road.

After basic training the horse will spend time in the city getting use to traffic and crowds. Upon completion of training the horse will be given a new name and start its career on the police department.
COVID-19 FAQs
Stay Informed
Agendas & Minutes
View Latest Updates
Make a Payment
Pay Bills or Tickets
Bids & RFPs
Access Open Opportunities
Forms & Permits
Complete Necessary Documents
[]